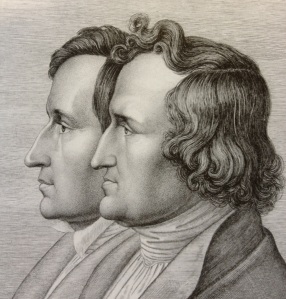 Did you know when the first English translation of Grimm’s fairy tales appeared in 1823 many people thought they were ‘grim’ fairy tales? Which is not too far from the truth, as many of the stories in the first edition of Children’s and Household Tales, published by Jacob and Wilhelm Grimm in Germany in 1812, were quite gruesome.

In the early tales it was evil, jealous mothers that wanted their daughters dead (think Snow White and Hansel and Gretel). It was only in later editions these women morphed into wicked step-mothers, presumably so children weren’t scared to death of their own mothers.

In The Frog Prince, the ungrateful young princess hurled the frog against a wall (not kissed him) and in Cinderella, the wicked step-sisters chopped off bits of their own feet so as to fit the slipper. 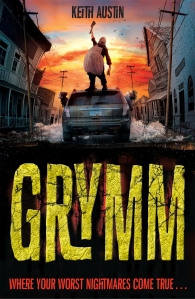 But it wasn’t Austin’s childhood memories of Grimm’s tales that inspired him.

“I don’t remember reading them, to be honest, at least not the originals,” he says. “But I think they have an influence on everyone, whether we know it or not – certainly the Disney-fied versions anyway.”

It was buying an original version of Grimm’s tales that ignited Austin’s passion for the grotesque.

“I had taken 3 months leave without pay to write a book, wrote 20,000 words in the first month and realised it was rubbish. I threw them away, got drunk, bought the Grimm collection and, bang, Grymm popped in to my head.”

“It was the first time I had read the originals, and I was blown away – and mightily impressed – by the viciousness in them. I thought, wow, these are NASTY!”

“I was a little dispirited by the insipid nature of much of the Young Adult literature around at the time, so decided to try to write a modern fairytale that was just as bizarre, twisted and venomous.”

“My son was 13 at the time so I started writing it for him. He’s 23 now so you can see how long this journey’s been!”

Having recently re-read many of Grimm’s tales for a trip to Germany following in the Grimm Brothers’ footsteps, I decided to read Austin’s novel. And it was a page-turner, albeit a gruesome one.

Admittedly, I nearly put it down when one of the young heroes finds maggots in his milkshake (well, I’m not the target market by a long shot), but I was intrigued to know how the story would pan out… and wasn’t disappointed.

(Though I did have a bizarre dream afterwards involving human flesh.)

Read the Grymm blog here and watch out for Austin’s next YA novel Snow, White, due out in 2014.