There is nothing at the intersection of the rail line and the road to Maralinga. Just desert as far as the eye can see. An upholstered armchair sits in the centre of the dusty road, facing the railway line. Beside it a stunted tree, an abandoned tyre at its base, is adorned with two scraps of silver tinsel.

Dusty 4WDs, utes and station wagons are parked beside the rail siding of Watson, having travelled hundreds of kilometres to reach this remote spot on the edge of the Nullarbor the previous evening. A tarpaulin stretched above mattresses on the dirt is all that remains of a campsite.

As the Indian Pacific grinds to a halt at 8am on Friday morning eager young faces search the silver snake’s disgorging passengers for two people; Bulldog Man and Santa. 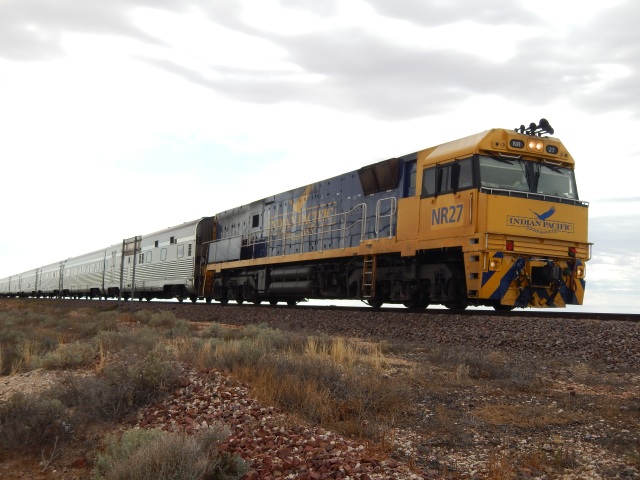 For the past 13 years Great Southern Rail has run an Indian Pacific Outback Christmas Train, spreading Christmas cheer to regional communities along its transcontinental route from Sydney to Perth, a distance of 4352km. Each year Santa travels on the train along with entertainers. 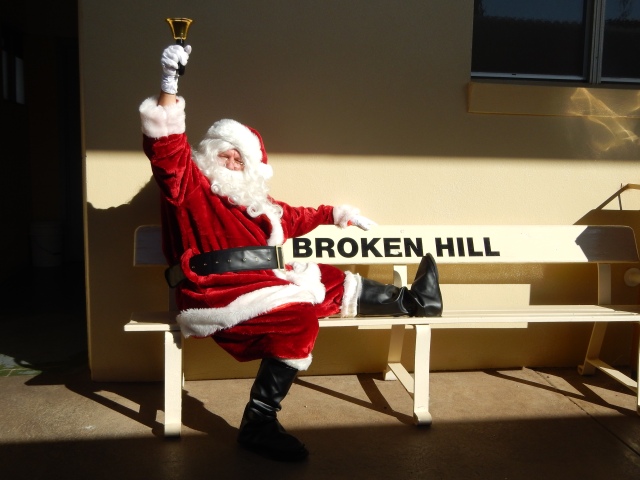 This year, in collaboration with Adam Thompson, frontman of band Chocolate Starfish and founder of Muso Magic, they took it one step further, and the children of Bathurst, Broken Hill, Yalata and Kalgoorlie united to write and record a new Aussie Christmas carol, Bring on Christmas Day.

Adam visited the schools in September, providing music workshops and helping the children pen the song and record the music video, which features landmarks from the region, such as Bathurst’s Mount Panorama, the big red seat at Broken Hill and the Super Pit in Kalgoorlie. Proceeds from the sale of the song on iTunes go to the Indian Pacific’s charity partner, the Royal Flying Doctor Service (RFDS), which provides medical services and emergency support to regional and remote communities. 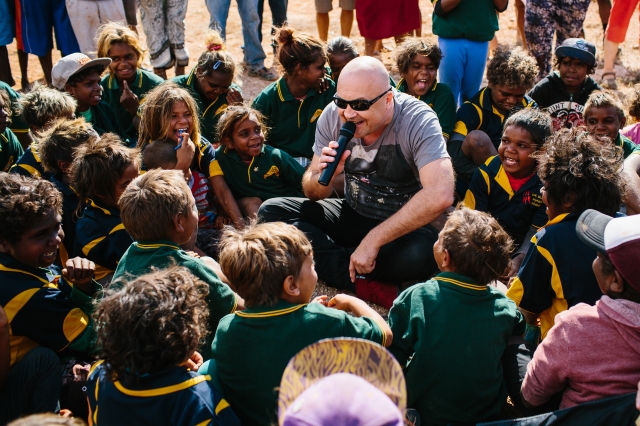 So the children from Yalata and Oak Valley schools are understandably excited to see Adam again, aka Bulldog Man, despite having come directly from an exhausting week at sports camp.

As they suck on Christmas lollipops the guys from Chocolate Starfish perform amongst them as family members film on mobile phones and cracked iPads. Determined to engage the kids despite the early hour, Adam gets down on all fours in the dirt for his bulldog impersonation, which sees the children squealing and scattering in delight.

Together they sing Bring on Christmas Day, enticing Santa from the train. As dark clouds roll overhead Santa is escorted to the upholstered chair where he disappears behind a mob of children as he dispenses gifts and good cheer.

The visit is over all too soon and as the Indian Pacific pulls out, clouds of dust are already rising from the road as vehicles make the long journey (up to six hours) back to their remote communities.

But for guests on the train the party continues, with Chocolate Starfish doing impromptu performances in the lounge car each evening. Consummate and charismatic  entertainers, they work the somewhat sceptical crowd of predominantly retirees until they are all on their feet dancing, including Norm, who’s over 90. They have the train rocking in more ways than one.

Bring on Christmas Day is available for $1.69 on iTunes, with all proceeds going to the Royal Flying Doctor Service.

Watch the You Tube clip of Bring on Christmas Day.

See Great Southern Rail for information on the Indian Pacific.

MusoMagic conduct musical workshops and programs to motivate and empower groups of all ages and backgrounds.

Disclaimer: I travelled as a guest of Great Southern Rail on assignment for RACV magazine.