Sandstorm of Fairytales & Fables in Windsor

The Pied Piper of Hamelin, Narcissus, Gollum, Icarus and other fabled creatures have come to life under the shady jacarandas, oaks and pepper trees on the banks of the Hawkesbury River at Windsor, in Sydney’s northwest, for the 2nd Hawkesbury International Sand Sculpting Championship.

Fourteen professional sculptors from Portugal, Latvia, Belgium, USA, England, the Netherlands, Czech Republic and Australia have each shovelled, chiselled, carved and scraped 20 tonnes of sand into intricate sculptures depicting characters from this year’s theme of fairytales and fables. 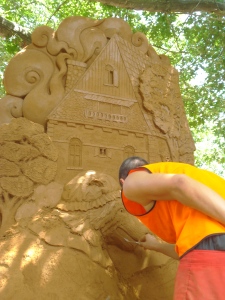 Jakub Zimacek works from drawings for his wolf.

Sculptors had from January 10-13 to complete their works, which remain on display until January 28. My son and I visited on the second day of competition to see the artists at work and watch the sculptures take shape. (An added bonus of visiting during the competition is free return entry to see the finished sculptures.)

Some sculptures were well underway and immediately recognisable, while others were still a long way from finished. But it’s amazing how quickly some of the artists work. Tickets allow multiple same day visits and when we returned after lunch in town we noticed several sculptures had evolved considerably. 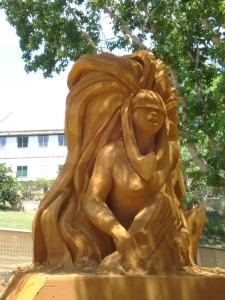 Queen of the Sea by Joris Kivits

Some artists worked from sketches or photos, others from images in their minds. Most chose well-known stories form Greek legends or Aesop’s Fables, while others, like Joris Kivits from the Netherlands, made up their own fairytales. His half-woman, half-octopus ‘queen of the sea’ was brought to life to save the world from Ariel, who grew to be a problem child. Even before it was finished this machinegun-wielding octo-girl was my son’s favourite sculpture.

While the competition sculptures are now completed, two sculptors will remain on site until January 28 working on a display piece, so you can still see how a sculpture is created. Once you’ve ogled the professional works kids channel their inner artist and join a sand sculpture workshop, make a sand painting or bottle coloured sand.  There’s a giant sandpit for little kids too and tables and chairs under shady trees for an ice cream or picnic.

There are plenty of eating options just a short walk away in George Street, especially near Thompson’s Square, where you’ll find the historic Macquarie Arms Hotel. While you’re in town visit the Hawkesbury Regional Gallery and the Hawkesbury Regional Museum. The latter houses an exhibit of Windsor’s own fabled flabbit, but that’s another story.

The 2nd Hawkesbury International Sand Sculpting Championship, Howe Park, Windsor, runs from 10-28 January 2013 and is open from 10am to 7pm daily.

For more things to do in the area visit Hills Hawkesbury & Riverlands Tourism.

Briar Jensen is a Sydney-based freelance travel writer. In her blog, Briar's Travel Beat, she shares her travel experiences to inform, entertain and inspire.
View all posts by Briar's Travel Beat →
This entry was posted in Australia, Hawkesbury, Sydney, Travel and tagged family fun, Hawkesbury, sand sculpting. Bookmark the permalink.