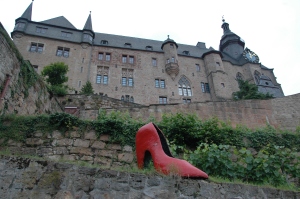 Ever dreamt of sleeping like a princess – in Sleeping Beauty’s castle? Fancy letting down your hair in Rapunzel’s tower? What about a romantic weekend at Snow White’s palace?

Or perhaps you just want to stay in a real palace, fortress, or castle? Well you can do just that on the German Fairy Tale Route, a 600km trail from Hanau in the south to Bremen in the north.

I recently travelled part of the Fairy Tale Route, as a guest of the German National Tourist Office, for a story for Escape. I was on the trail of the Brothers Grimm, for the 200th anniversary of the publication of their Children’s and Household Tales.

The trail takes in numerous palaces and castles. Some are purely museums, offering a window into the life of their landgrave owners. But others offer accommodation and I was lucky enough to stay in a couple of them, though there are plenty more to choose from.

Some have become synonymous with the castles depicted in Grimms Fairy Tales because of their location or physical features. It’s a great marketing tool which has been embraced by the local towns on the Fairy Tale Route. Here are a few photos to arouse your inner prince or princess. 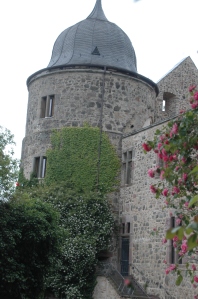 Popular for romantic meals, proposals and weddings, you can sip rose-infused aperitifs from thorn-stemmed, rose-bowled wine glasses while Sleeping Beauty and her young prince recite the story of Sleeping Beauty, accompanied by specially-composed cello music.

Sleeping Beauty’s name was Briar Rose and roses climb the castle wall and take pride of place in the garden, which is part of the European Garden Heritage Network. The perfume of the roses is intoxicating and adds to the romance. 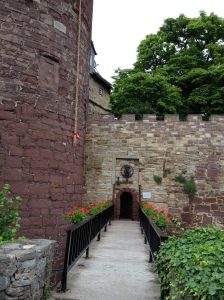 It’s possible to imagine the keep of this 700-year-old castle was Rapunzel’s tower – the long dangling plait certainly helps. This was a medieval fortress and inside it’s dark timber, exposed beams, and suits of armour.

The dining room incorporates the original chapel, which is popular for weddings. But I love the dining room in one of the smaller towers, where curved banquettes face a central fireplace.

You can climb Rapunzel’s tower for panoramic views over the countryside. 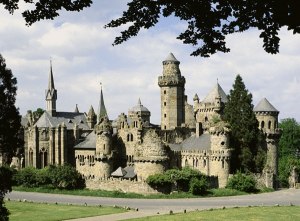 But for pure visual delight, Löwenburg Castle in the grounds of Bergpark Wilhelmshöhe in Kassel takes the cake. Unfortunately, you can’t stay here, but it is worth visiting. Built in the grounds of Wilhelmshöhe Palace purely as a pseudo-medieval ornamental garden feature – but later expanded to become a secret love shack, it is the Disney-esque version of what we think of as a fairy tale castle.