Bangkok back in business

According to this report from the Tourism Authority of Thailand, as of the 3rd March the People’s Democratic Reform Committee (PDRC) has scaled back their protests in Bangkok, dismantling the temporary rally camps at major intersections in the city.

This is good news for Thai businesses and tourism in particular.

I passed through Bangkok in early February en route to Koh Yao Yai Village and Elephant Hills Truck Safari (you can ready my upcoming travel stories in Escape soon). 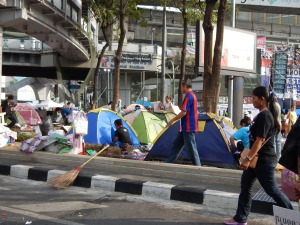 Protesters camping out in Pathumwan

At the time the PDRC, who are protesting about what they claim is a corrupt government led by Prime Minister Yingluck Shinawatra, had set up protest camps at four major intersections in Bangkok – Ratchaprasong, Pathumwan, Silom and Asoke. While the protesters were peaceful and did not block access to the surrounding shops or hotels, traffic was adversely affected.

Hotels in particular were suffering from a lack of tourists. I stayed at the VIE Hotel in Ratchathewi and the Siam Kempinski Hotel in Pathumwan and both said occupancy rates were significantly lower than usual.

I visited (cautiously) the Pathumwan protest site, well known for the MBK shopping mall. While it was a bit awkward to get into the mall at street level, I certainly didn’t feel threatened by the protesters in any way. In fact, quite the opposite. As an obvious visitor, they ensured I had easy access through the area, which looked very much like a street market, except for the tents and media presence.

Thousands of protesters from outside the central city had set up small dome tents down the middle of the road and on the traffic islands. Ablutions trucks parked nearby provided toilets and showers and a first aid tent was stocked with wheelchairs and triage beds.

A large stage and video screen was set up under the Skytrain overpass and when they weren’t hosting rally speakers, they showcased rock bands, giving the place a party-like atmosphere.

In the early morning women crouched outside their tents applying their makeup. Everyone helped sweep the streets of rubbish from the night before. Stalls were laid out on the pavement selling food and protest merchandise.

I was amazed at how much merchandise was available, all sporting the colours of the Thai flag, red while and blue. There were whistles, headbands, phone covers and T-shirts.  Enterprising families sat on the street weaving bracelets and baskets.

The protests were predominantly confined to Bangkok and I certainly didn’t see any evidence of them on my travels elsewhere in Thailand.

However, things changed significantly in Bangkok after I left, with violence breaking out in some areas, inflicting a number of casualties. Fellow travel writer Christine Retschlag (aka The Global Goddess) was there at the time and you can read her blog here.

As she quotes from one ex-pat, the protests have had a significant effect on the livelihoods of locals, many of whom rely on the income from tourists, either directly or indirectly.

So it is great news for locals and tourists alike that the protests have been scaled back in Bangkok.

As Mr Thawatchai Arunyik, the governor of TAT said, “At last, the heart of Bangkok can get back to normal. This scaling down of the protests means that international visitors as well as local residents can quickly and conveniently get around the city’s key shopping, business and entertainment districts as usual.”

Thailand needs our support, so if you’re thinking of a holiday in the ‘land of smiles’, consider doing it sooner rather than later. I know the Thai people will be grateful. And there are bargains to be found, with many hotels and resorts currently offering specials to entice visitors back.

I travelled to Thailand as a guest of the Tourism Authority of Thailand.

Briar Jensen is a Sydney-based freelance travel writer. In her blog, Briar's Travel Beat, she shares her travel experiences to inform, entertain and inspire.
View all posts by Briar's Travel Beat →
This entry was posted in Thailand, Travel, Travel News & Events and tagged Bangkok, land of smiles, travel, unrest. Bookmark the permalink.

2 Responses to Bangkok back in business